One of the main objectives of the Neighbourhood Plan is to redress our present age imbalance and to achieve this, the parish needs to have a variety of housing that younger people can afford. We already have a high proportion of affordable rental properties in Thurlestone village (47 in total), but the cost of open market housing in the parish is still beyond the reach of most young local people. Like elsewhere in the south-west, people retiring to the area from the more affluent areas of the country and second homeowners have forced housing prices up, so they no longer reflect the average local income. This is why the Neighbourhood Plan supports Community-led Housing.

What is Community-led Housing?

Community-led Housing is discounted housing for local people who meet the parish Local Connection eligibility criteria to be able to get a foot on the property ladder. This is made possible by grant funding from central government. The Community Housing Fund is specifically for parishes such as our own that have a high number of second homes and SHDC has been allocated £1.88m to help facilitate such schemes. There is also grant funding available from Homes England. To ensure that it is retained as Community-led Housing in perpetuity and occupied as a principal residence, each dwelling will be subject to a Section 106 Agreement.

Who is eligible for Community-led Housing?

Only people who are registered with Help to Buy South and who meet the parish Local Connection criteria will be eligible. In January 2019, the Parish Council held an Open Forum/Workshop on Community-led Housing (see below) at which six eligible households were identified - of whom, three were 3rd generation families and one was 2nd generation, and all four households have immediate family living in the parish. Another two households had lived and/or worked in the parish more than five years and had children attending the local school. Helping these families get on the property ladder is an important way of ensuring the future sustainability of the parish and securing our services and facilities.

Where will the Community-led Housing be built and will I have a say?

The initiative relies on finding landowners who are prepared to sell their land well below the market rate, at £10k per plot. This means that the land offered is likely to lie outside settlements, as the land within a settlement has a higher commercial value. The site will also require planning permission. In terms of location, the Neighbourhood Plan supports a site that will enhance or maintain the vitality of a village community and the parish as a whole; while the District’s Joint Local Plan requires the housing to be located adjoining or very near to an existing settlement on land that would not otherwise be released for housing and hence known as ‘a rural exception site’. You will be able to have a say in where the housing will be built prior to and in the course of the planning application process.
​
Community Housing Group

​The members of the Community Housing Group who are helping to progress this initiative are Jess Wellens, Emma Richards, Joe Arafa, Hannah Quiggins, Caroline Hodges, Paul Gunning, Lewis Durant and Cllr Sue Crowther (Chair of the Neighbourhood Plan Committee and Thurlestone Parish Councillor). Jess is leading the Group and her email address is jessicabow@hotmail.com.

On Monday 28 January 2019 there was an Open Forum / Workshop in the Parish Hall to take this initiative forward.

This was an opportunity for those attending to discuss and comment on the scale and design of the development, and possible sites within the parish, including two sites already under consideration – one at West Buckland and another at Buckland Park Farm, North Upton. These topics were discussed in small groups around several tables and everyone had the opportunity to discuss and raise questions about all the topics. A questionnaire was also circulated to obtain household and local connection details from those interested in participating in the initiative.
​
The purpose of the Open Forum / Workshop was to:
​Please use the buttons below to access the following:
A report summarising the findings of the workshop was presented at the meeting of the Parish Council on Monday 4 March 2019.
The findings were subsequently presented and discussed in detail at the public quarterly meeting of the Neighbourhood Plan Advisory Group on 12 March 2019. For the Minutes of the meeting click here.

This meeting was devoted to an update about the Community-led Housing initiative. For PowerPoint presentation click here.

Annual Meeting of the Parish Council on Monday 13 May 2019


Informal Meeting with SHDC on Thursday 16 May 2019

Those eligible for the scheme who have already registered with the Community Housing Group and Help to Buy SW attended an informal meeting with SHDC Community Housing officers, Rob Ellis and Tom Morris. The meeting was requested by the officers to discuss more detailed financial aspects of the scheme with the prospective purchasers, such as (a) project viability and ultimate house selling prices to ensure they are affordable (b) Homes England potential and (c) the development programme.

By the end of June SHDC had assembled a project management and design team, and commissioned ecological and topographical surveys of the West Buckland site.

On 30 August SHDC provided the following update, which was relayed to the Parish Council meeting on 9 September:

The Option Agreement between SHDC and Bantham Estate has still not been signed and the likelihood of SHDC progressing a planning application and pre-application public consultation in late October is therefore in doubt.

Given the present status of the initiative, the location of the proposed Community-led Housing was discussed at the following two public meetings:

At this meeting it was announced that on account of objections received by the Bantham Estate from residents of West Buckland (WB), the Estate has suggested an alternative site for community-led housing on the field opposite Bantham shop. At this stage there is no further information about the proposed site. The West Buckland site has not been removed altogether, but the Estate does not want to upset local residents in West Buckland by offering a site for which there is not universal support. Members of the public were invited to ask questions and make comments on the three possible locations for the community-led housing: West Buckland, Buckland Park Farm (North Upton) and Bantham.

The meeting was preceded by a public session to discuss a summary of the comments obtained on 1 October for each of the three sites and to allow members of the public to make further comments. Councillors had already reviewed the comments in full. At the meeting that followed, Councillors resolved to proceed to make a planning application for the Buckland Park Farm site since the Bantham Estate had decided not to progress the West Buckland site at this time, the District had pulled their people off the project, and there had been no public consultation on the Bantham site. 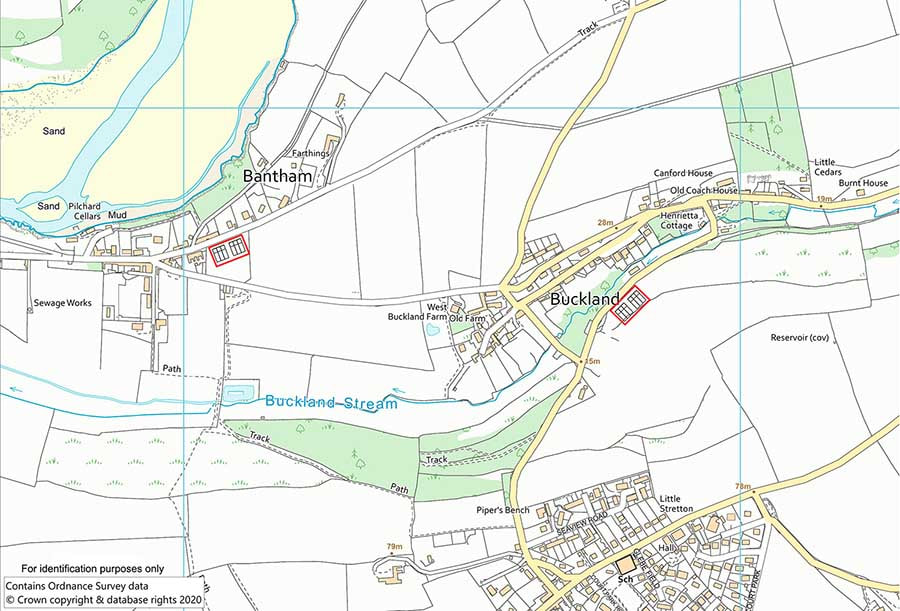 418 leaflets were distributed within the parish and 102 responses were received. 44 were collected from the Bantham shop and 58 from the Thurlestone shop.


Please use the button below to access the comments.
Comments on Sites
The most repeated comment in favour of the Bantham site was that it would make the village more year-round and help sustain the shop/cafe and pub. Concerns about the West Buckland site focused on the undeveloped, steep terrain.

The Parish Council also obtained initial ‘without prejudice’ comments from an independent quantity surveyor and the Manager of the South Devon AONB Unit to help make their decision.

At the their meeting on 6 July 2020, having considered environmental, topographical, ecological and highways issues, as well as residents' comments and the likely development costs, the Parish Council decided to promote the Bantham site for Community led Housing. [See the Parish Council’s July Minutes for more details]

Following the Parish Council’s decision, Community-led Housing Updates are provided at the monthly Parish Council meetings (PCMs) and are summarized below:

PCM on 2 November 2020 – Councillors Crowther and Williams had met SHDC community housing officers and project engineers on site who are continuing to assess the site’s viability. Much will depend on the infrastructure costs, as there is no Homes England grant available for infrastructure. This initial development work is funded by the Community Housing Fund. Other possible sources of funding are also being explored and there is a good possibility that the scheme may qualify for the government’s proposed First Homes grant in late 2021/early 2022. If so, then that would help bring the prices down. In the meantime, provided the houses remain affordable to those eligible, depending on the infrastructure costs, SHDC will embark on the detailed design and planning process. This will, hopefully, begin in December, with a view to making a detailed planning application in May 2021.